Repercussions, is an ongoing project that experiments on the possibilities of “voicing” ordinary objects. The attached surface transducers and vibrating sensors enable the self-resonance on each of found objects, turned each of them into a “speaker object” with a distinct quality of sound; The convergence of the sounds then transforms the exhibition space into a large mixer. The audience are welcome to move around and experience different sound combinations as the resonances of various materials’ vibration interweave in the space. “Repercussions” has been presented in several forms including performances, installations and compositional projects.

Misplaced Resonance creates a multichannel sonic environment where the physical presence of sound and the ongoing engagement became the priority. The piece pays tribute to the mournful sound of the Wanhua, which is a region with the most serious tramp problem in Taipei. The vast majority of homeless people rely on recycling to make their living as ragpickers. When the resonance was being misplaced, the dissonant and incongruous audio became the metaphor of the disharmony under the surface of everyday life. Space, objects and audio feedbacks formed a closed loop of the symphony, reflecting the unavoidable routine and capital system. 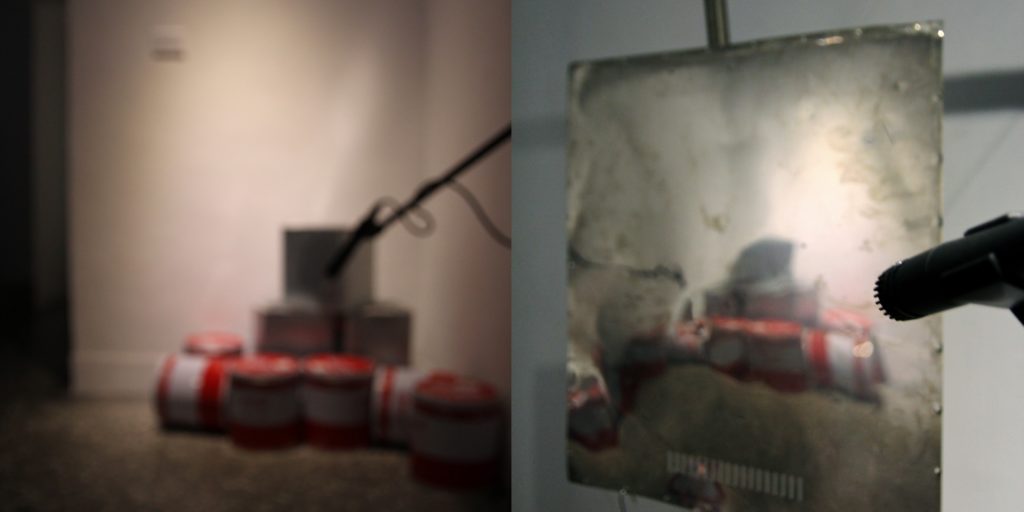 Space Is Only Noise If You Can See: Installation at Waley Art, Taipei, Taiwan, 2016

Object Improvisation
Found objects, transducers, amplifiers, improvised recordings, 2017
Chanchu Shan Project
Video, found objects, transducers, multichannel interface, 2016
This work is a research-based project that investigates the history and current situation of Huan Min New Village, also called Huan Min New Village. Chanchu Shan is a dated military-base that isolated from the outer world for decades. In this immersive soundstage of sounds and objects, the assemblage of layers of memories occurs, just like those mysterious alleys in the city where all the abandoned and forgotten stories happen.
Call and Response Live Performance
Transducers, contact mic, feedback system, railroads, 2014
Call and Response was one of the programs in Asia Triennial Manchester, presented at the Science and Industry Museum. Industrialization makes people neglecting the material’s existence besides its functionality. Inspired by the German physicist and musician Ernst Chladni (1756-1827), this piece tried to raise awareness and perception of fluctuations in surroundings. During the regular demonstrations of the old steam locomotive, the vibrations picked up from the rail were being modulated and amplified from surfaces and metal plates at the platform in real-time, creating stretching drone echoes.