Repercussions, a term meaning the unforeseen actions or events given or exerted in return, is a ongoing project that experiments on the possibilities of “voicing” ordinary objects. Through attaching  surface transducers to vibrate the surfaces of various found objects, Chi turns each of them into a “speaker object” with distinct quality of sound. “Repercussions” has been presented in several forms including live performances, sound installations and compositional projects.

Composer David Tudor explores the idea of the resonant ‘speaker objects’ in his “Rainforest” series to rethink the general perception of human touches, instruments and performances. Drawing on his work whose vibration is manually operated, Chi experiments with contemporary technology to design a system that allows sounds to flow spontaneously within a space.

In Repercussions, the attached surface transducers and vibrating sensors enable the self-resonance on each of the found objects; the convergence of the sounds then transforms the exhibition space into a large mixer. Audience are welcome to move around and experience different sound combinations as the resonances of various materials’ vibration interweave in the space.

“Misplaced Resonance” is one of the compositional versions of the “Repercussions” project. It created a multichannel sonic environment where the physical presence of sound and the ongoing engagement become the priority. The piece pays tribute to the mournful sound of Wanhua, which is the region with the most serious tramp problem in Taipei. The vast majority of homeless people rely on recycling to make their living as ragpickers.

I used a recorded phrase from a string ensemble. The installation consisted of found objects collected from junkyards. Each object attached with a contact mic and surface transducer, playing the role of a sound mirror and speaker. The whole system was triggered by a recorded phrase from a string quartet. Objects then filtered and highlighted the resonance of the material, amplified and redirected it back into the air through constant vibrations. The evolving drone noise was flowing and growing among different objects, and the individual resonant frequency of each object was “mirrored” and unfolded within the material itself. With resonant feedbacks and fluctuations in the space, the audience is free to listen and involve in the sonic environment according to their will. When the resonance was being misplaced, the dissonant and incongruous audio became the metaphor of disharmony under the surface of daily life. 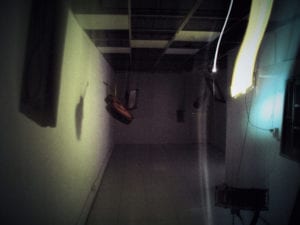 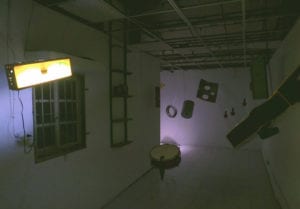 Chunchu Shan (Toad Mountain) is the name given to a hill near Gongguan, whose saddle used to be the thoroughfares for people entering Taipei during the Tsing Dynasty. Adjunct to the mountain, there is a dated military installation, called Huan Min New Village, which is the longest remaining cultural site in Taipei. Built along the contour line, it is the Mountain Military Kindred Village that is rare in Taiwan. By Military Kindred Village, it refers to the villages distributed or constructed by the government for soldiers and their families of the Republic of China during 1949 to 1960. Many of those soldiers who didn’t collect the government provided houses instead formed their self-sustaining military installations nearby. The combined military installations, which were the core of the Taiwan Strait air defense, are adjunct to Air Force Warfare Command Department so that they remain solitary due to the military control. Compared to the prosperity and modern construction of the city, the place appears to be frozen in time, under the low frequency of use. Located on the bank of Xindian, the villages are apart from the city clamor. Even though it is attached to the NTU shopping district, few students go there. It is an inappropriate juxtaposition between an exotic scene near the edge of the urban area. It is also a forgotten fragment of time. Since 2013, Toad Mountain has been facing a dual crisis. The government of Taiwan wants to demolish the historical site due to urban renewal plan. On the other hand, the residents of Huan Min New Village are taking legal action against the Taiwanese government to preserve their hometown. The Military Kindred Village issue is still unresolved currently, under the Taipei urban renewal process.

In this project, these found and abandoned objects play the role of a sound mirror and speaker. The object then filters and highlights the resonance of the material, amplifies and redirects it back into the objects through the surface transducer. The evolving drone sound comes from the vibrations of these found objects, each attached with surface transducers, blended into the resonances of the material itself through multi-channel configuration. Through the constant amplification and resonant feedback of subtle vibrations, the individual resonant frequency of the each object is “mirrored” and unfolded within the material itself. The audience chooses their way to listen, when the resonance has been misplaced, the dissonant and incongruous audio will provide the listener a delicate listening experience.

In this immersive soundstage of sounds and objects, the assemblage of layers of memories occurs, just like those mysterious alleys in the city where all the abandoned and forgotten stories happen. For an outsider, these alleys are just natural scenery, but for the inhabitants, every brick and wall carries a life story.

“I want to use a song to erase the paradox between memory and reality. They shouldn’t be in the binary opposition, because we can’t use today to erase yesterday, neither can we use the memory of yesterday to replace today. The juxtaposed timeline is not the only way of feeling the present since every memory from the past has condensed and become the present.”

Rather than saying this project creates new sounds for objects in daily life, it is more like using the audio interface to lead us to find out those everyday scenes that are ignored. I try to pick up those pieces of real life stories and make the objects talk with the audiences. To embrace those unknown and figure out the other way rather than forgetting.

Industrialization makes people neglect the material’s existence besides its functionality. This work tries to create the awareness of the environment and the experience of sensing the fluctuations in surrounding space. With contact microphones and surface transducers, different objects play the roles as the sound mirror and speaker. The microphone picks up the resonance from within the material, amplifies and redirects it back into the objects through the surface transducer. Through this constant amplification and resonant feedback of subtle vibrations, the individual resonant frequencies of the each object are “mirrored” and unfolded within the material itself. During the performance, viewers are allowed to interact with the piece by producing the sound in the space and play back through the surface with contact mic around them in real-time.